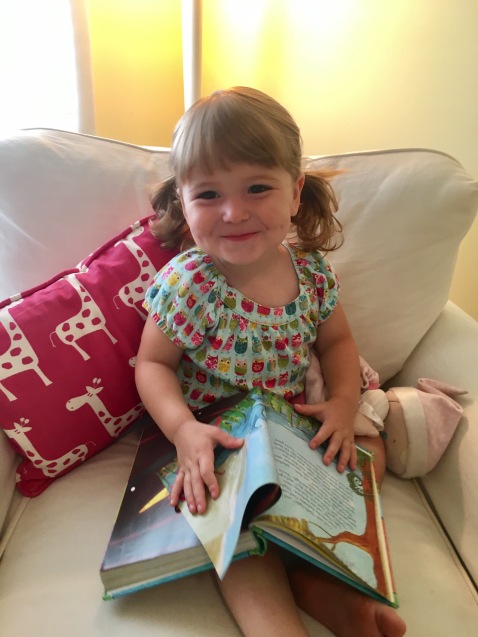 We hear a lot about baby Jesus in December, but not much this time of year, so I wanted to share this little heartwarming moment today. We love to read children’s Bibles with our kids, and it is neat see each child identify with the stories. John’s favorite is David and Goliath and every time Goliath dies, John slaps the book as hard as he can and roars. It usually scares his sisters, but he is a precious little warrior. Mary’s favorite stories include the Marys; Mary Magdalene, Mary of Bethany and Jesus’s momma all captivate her because she shares their name.

But Anna, at age (almost) 2, usually just wiggles around and tries to eat the books. She has just started talking more and wanting to read books by herself, so I handed her the Jesus Storybook Bible the other night. There was one (and only one) person she wanted to find:

“Der’s baby Jeeee-Zus!” she squealed with joy when she found him.

It blows my mind that the One who made the gigantic sun became as tiny as a baby. The One with all Heavenly power arrived powerless. The One who can hold all creation in His hands needed His mother to hold Him.

The Living Word had to learn how to talk just like Anna. And so she, one of the the least of these, can relate to Him! I find it incredible that we don’t have to change and grow to get close to God, but that He changed and became small to grow close to us. What a beautiful upside-down Kingdom; what an amazing love!

As Anna was pointing to baby Jesus in glee, I asked her if she remembered his momma’s name.

“Mar-wee!” she said with excitement.

“That’s right! And what about his daddy?” I asked.

I chuckled. Anna may not know Jesus’s earthly father’s name yet, and she may not know His Heavenly Father either. But…He knows little Anna. And He loves her so much that He made Himself small so that she could know Him too. She may be little, but she matters in a big way to that baby Jesus.

And that is worth a joyful squeal!

4 thoughts on “Christmas in June”